World-class luxury and exceptional service, tailored just for you

Step into Royal Blues Hotel and discover a world where high touch luxury service meets superlative relaxation in a distinctly posh oceanfront setting. An unmistakably contemporary vibe – think modern mega yacht meets the Whitney Museum – invites guests to take advantage of thoughtful guest room technology and panoramic ocean vistas, and admire the work of such artists as Massimo Vitali and Brian Hamill in the same space. Guests can drink up the sunshine with soft white sand beaches just steps from the hotel, or venture to neighboring Boca Raton to dive into the rich cultural history, fine cuisine and attractions found there.

A proud member of the Relais & Châteaux family, our dedicated team of hospitality professionals is devoted to providing extraordinary, authentic service not found elsewhere in Deerfield Beach. For the discerning guest seeking a memorable stay with a bit of whimsy, look no further than Royal Blues Hotel.

Flip through to see for yourself what makes Royal Blues an oceanfront destination unlike any other.

We don’t want to toot our own horn. Discover what some of the finest travel authorities are saying about Royal Blues. This chic boutique resides in a lovely neighborhood. with tight streets, towering palms, and a mixture of shopping, condos, and small businesses.
Read More 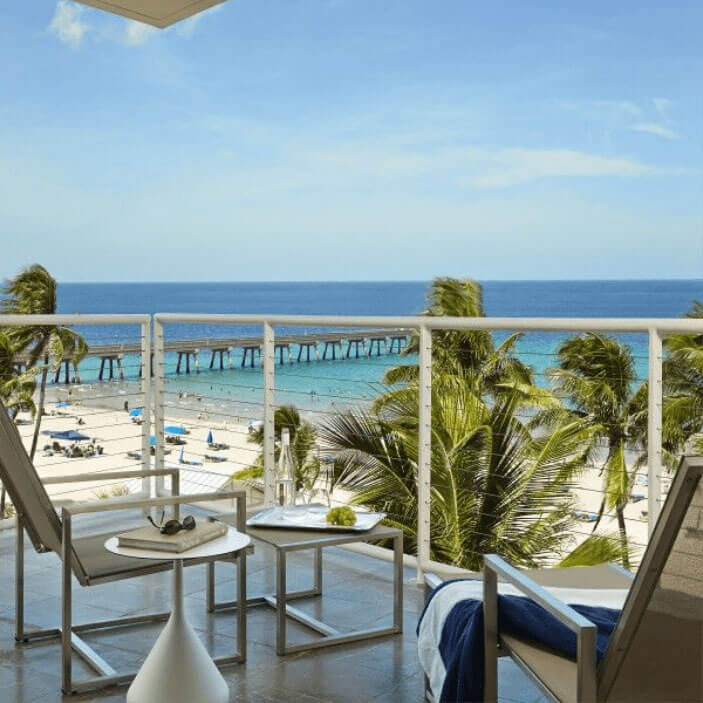 We are always so impressed when a new hotel or restaurant opens and it is clear that the owners have put a lot of thought into their new venture....
Read More Cozied up to the well-known city of Boca Raton, Royal Blues Hotel | Deerfield Beach at Boca Raton is less than five miles away. Mere steps to the south, explore the underwater camera located at picturesque Deerfield Beach pier here.

Just a stone’s throw away from a number of major metropolitan areas, Royal Blues is easily accessible by plane, train and automobile.

Need a lift? Our guest relations staff members would be happy to assist in coordinating transportation.